Water in a can now available on prescription. No, really.

No, its not a homeopathic sort of magic water this time, but instead Magicool.

Yep, remember when there were cheesy adverts on the TV all the time advertising this breakthrough, world's first spray? The website for Magicool even goes so far as to call it "heaven-sent". What in it? Well, water it would seem. I can't find any of the other ingredients listed on the website, save for a rambling explanation of how they still manage to get away with putting fragrance into it whilst claiming that it is an "unscented" product. Presumably it will have some sort of propellant in it too.

The theory is simple, and to be honest pretty good. When its warm, water on your skin evaporates, drawing out the heat. You feel cooler. So that's good. But its fairly impractical to keep having a cold shower every two seconds if you're at work or out and about, so Magicool is a nice portable option. Fine so far.

However, Magicool have decided to go one step further, and start making medical claims with their Magicool Plus range. They're classed as medical devices (sound familiar?) so don't need to go through the rigorous clinical trials that licensed medical lotions or potions have to. But they're now apparently available on prescription, so there must be some evidence that they work, right?

The Magicool website is frankly appalling. But what I'm looking for is a plausible mechanism of action for why their products work, and some good evidence that they do work. Let's have a lookie, shall we? 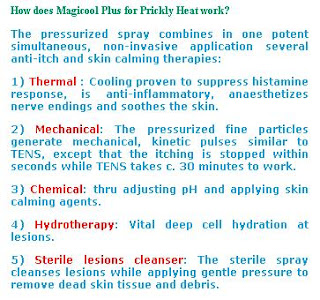 Kinetic pulses? anaesthetizing? vital deep cell hydration? adjusting pH? Despite its claims to be unscented, I am smelling pseudoscience at work. And what is with the text speak?! I've had emails from Nigerian princes asking for my bank details so that they can send me millions of pounds that are better written than this supposedly medical resource.

The evidence section appears to be a badly scraped together list of links from places like Trip Advisor and Yahoo Answers, where people have vaguely mentioned in passing that the product worked. But, dear readers, as we know by now, testimonials and reviews certainly do not constitute robust medical evidence, especially when lots of them are merely spam adverts posted on forums etc, as they are here. Again, there's no indication of what the ingredients actually are, so I have no idea whether or not there is even any plausibility in the claims above and beyond the fact that it might make you feel a little bit cooler.

So, if the manufacturer's aren't being forthcoming with any evidence, let's turn to the medical literature. This is made difficult, of course, by fact that I have no idea what is in it, other than water. Searching for the brand name brings up nothing at all, so it would appear that there is a grand total of no evidence whatsoever that this stuff actually works more than ordinary Magicool, or a shower, or standing next to a fan. The manufacturers are claiming that the product has "maximum therapeutic efficacy" on the basis of thin air.


According to Chemist and Druggist, the availability on prescription is coinciding with a large advertising campaign. This means two things:We'll have to sit through more daft adverts filled with smug thin people on holiday cooling themselves down despite not even looking remotely hot (where's the red face and frizzy hair, eh?!) and that some patients will inevitably rock up to their doctors and demand it on prescription.

The cost price to the NHS is £5.77. That doesn't seem like its going to break the bank, but I don't care how small an amount it is, frankly. There is a finite pot of money in the NHS, and we need to use every single penny of it wisely. If £5.77 is being spent on water in a can, that £5.77 can no longer be used to pay for something life saving.