The friendly and respectful homeopath.

I dont want to have to write this post, but it has been bothering me and I find myself thinking about it a fair bit. So, here it goes, and apologies for yet more homeopathy bashing.

I've written before about how i'm sure that a homeopathic consultation is probably quite nice. Spending an hour with someone who really listens to you, as opposed to a 10 minute curt conversation with a harried GP must feel lovely. And of course, homeopaths play on this contrast between holistic care and a more conventional symptom-based approach. They like to portray themselves as caring, benign folk who really care about your health and your rights as a patient.

I'm sure many of them really do care, although by definition misguidedly. Unfortunately, though, there are some who like to portray themselves as caring, but who in actual fact can be so utterly disrespectful it can make your jaw drop and cause you to still be thinking about it after a month has passed.
If you've ever said anything skeptical about homeopathy on Twitter, you will probably have encountered I'm-Not-Really-A-Doctor Nancy Malik. I don't mean this to be an as hominem attack, but goodness does she make it hard to refer to her without resorting to one.

I can't actually really remember the specifics of this conversation, but it involved a couple of us skeptic types questioning something posted by @urbanhealing. The conversation was going in the usual way, namely requests for evidence were being met with all sort of batshit crazy quantum bollocks. When that tactic didnt work, @urbanhealing had resorted to insinuating that we skeptics are stupid. In jumped Nancy Malik, with this bombshell, which took my breath away. 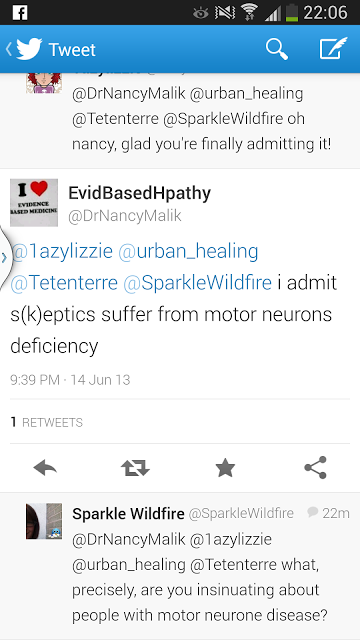 You can see my incredulous response to her, which was met with silence, even despite a couple of follow up tweets.

Motor neurone disease is an absolutely devastating disease, which has huge effects on its sufferers, as well as those around them. When my ex-husband's friends mother was diagnosed with it, the shockwaves and devastation of it were clear to see, even from a distance. It's no laughing matter, and it is certainly not something to fling about as an insult to people who reasonably question you.

Motor neurone deficiency means many things, but it does not mean you're stupid, which is the insinuation in the context of this conversation. It is a rare, severely debilitating disease which impacts on both morbidity and mortality but not IQ, and it is utterly disgraceful and disgusting to say so.

Probably the most famous sufferer of motor neurone disease is of course Stephen Hawking. So what on earth is she thinking using it as an insult to the intelligence of skeptics?!

I don't have motor neurone disease, and nor does anyone who I know directly. But that does not stop me from feeling rather sick and insulted by what Nancy Malik has said. Anyone with a little bit of empathy, heart and respect for other people would probably feel the same as me, I would imagine.

This is not indicative of a caring, holistic practice, but instead is cynical, unthinking and brutally insensitive. And its made all the worse by the constant portrayal of homeopathy as more caring than conventional medicine.

Oh, and of course it goes without saying that I will be more than happy to hear exactly what Nancy Malik meant with her tweet, and I will of course welcome an apology from her for the offence she has caused.