Ahh. Sunday mornings. They can mean only one thing: bacon.
Okay, two things: bacon and tea
Whoops, no let's make that three things: bacon, tea, and The Archers omnibus.

So welcome to the first instalment of an occasional series (probably so occasional that this is the only one), in which I critically examine the treatment choices of the fictional residents of Ambridge.

In today's omnibus, Hell-on's child falls over. There is much hysterical panic, and much bewailing the fact that she wasn't watching him properly. Apparently its hard to look after a child and gaze lovingly off into the distance in the direction of Rob Titchener's house. Who knew.

But never fear, Hell-on's mother, Pat (who doesn't appear to have noticed that her husband has been kidnapped and replaced by an interloper), is on hand to reassure her that she has done her best with the arnica.

Arguably, I'd say arnica is one of the most accepted forms of woo in the UK. Arnica cream is a standard item in many pharmacies, and I would say that many people know that it is supposed to be useful for bruises. I wonder just how many first aid boxes have a tube of arnica languishing in them, but I reckon it is quite a few.

Its also a poster boy for the sort of confusion that reigns between the public perception of homeopathy and herbal medicine. herbal arnica cream often sits side by side homeopathic versions with no explanation of the difference.

Even Nelson's seem rather confused about which modality to use, with both herbal and homeopathic arnica sitting in their "Arnicare" range of products. I can't quite get my head around this to be honest. Imagine going into an off-license and seeing two bottles of Smirnoff, one of which contains vodka and one of which contains water, though the only difference on the label is that one says Smirnoff Vodka 30C. Hmm.

Does the distinction matter? Yes, I think it does. I think its pure, outright deception to sell a homeopathic product to someone expecting a herbal medicine. One has arnica in, one doesn't.

Anyway, all of this is by the by. Obviously there is no evidence that homeopathic arnica works for bruising. It's homeopathy. It has nothing in it.

And as for herbal arnica? there's also no evidence that it works, although there is a little bit of prior plausibility, in that some of the chemicals in the arnica plant have an anti-inflammatory and anti-platelet action. There is, however, no information on how clinically significant these actions are, and whether rubbing a bit of cream into an area would get these potentially useful chemicals to the right place in any meaningful amounts.
Let's not forget that bruises are self-limiting. They go away of their own accord (and probably at the same pace), regardless of whether or not you rub some gunk into them. herbal arnica isn't risk free: the cream can cause  contact itchiness, dry skin, and rash. Orally, arnica can be pretty nasty stuff, even causing coma and death in extreme cases.

So, my evidence-based advice to Helen would be: kiss it better, and leave it be. Henry is a small child, and falling over is pretty common in that age group. Don't apply an ineffective treatment which could rarely lead to side effects, and save your money.
Posted by SparkleWildfire

Our Cochrane Collaboration,
Hallowed be thy aim.

Please have answered my question
In your systematic review

So I don't have to do a full literature search.
Amen.

(Idea shamelessly stolen from Nancy. Check out her blog, Evidence-based Skepticism. Also much thanks to David James for improving the wording.)
Posted by SparkleWildfire

Imagine there is a door in front of you. There is a person standing next to the door:

"Hey there, pudgy, do you want to be thin and beautiful without having to do any exercise at all? All you have to do is hand me some cash and step through that door there." 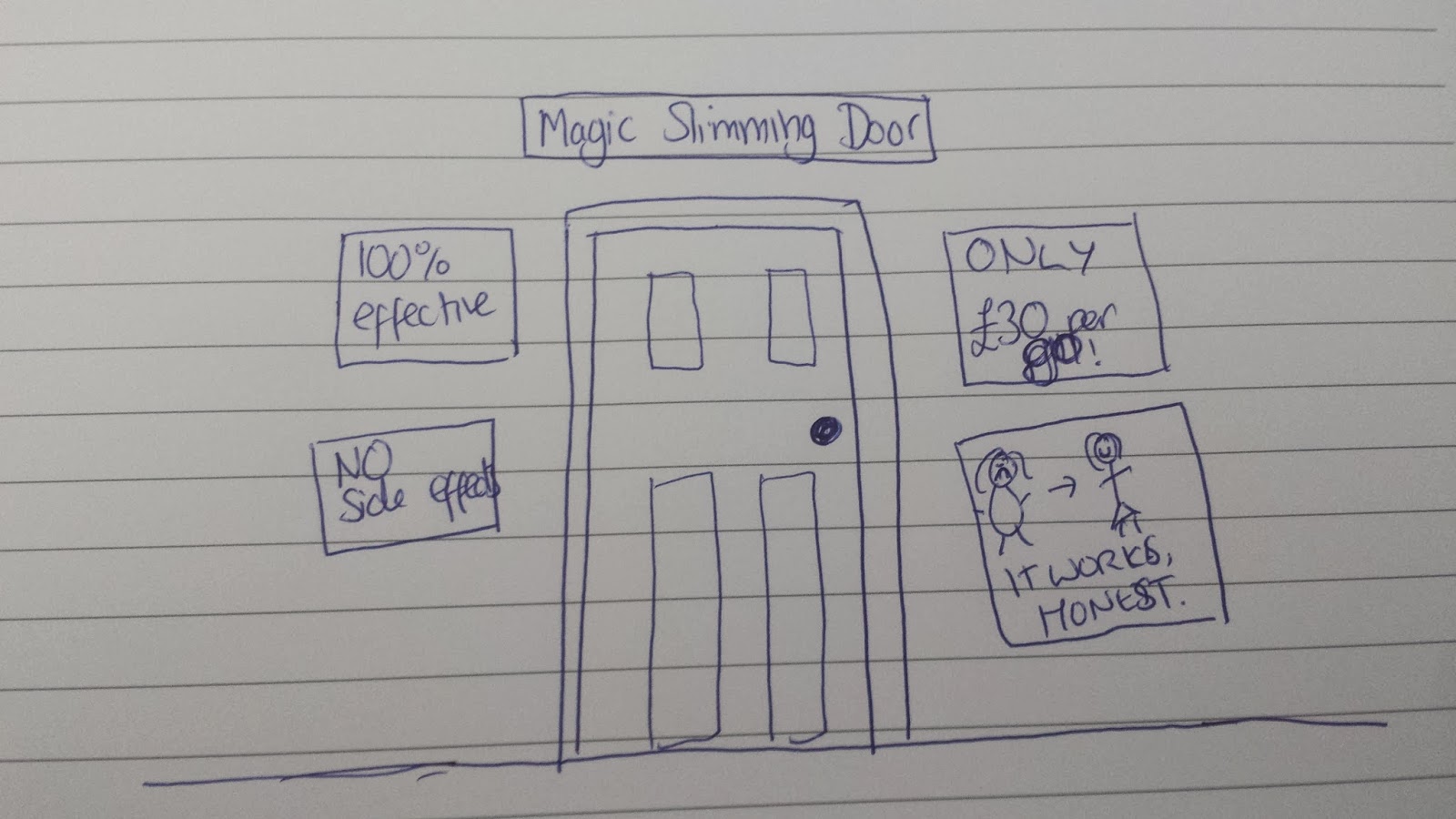 This person goes on to explain that if you step through the magic door, you will step out of the other side with a perfect, slim figure. You won't need to change your diet or do any exercise. You just need to walk through the door. They show you some glossy before and after pictures. There are pictures of beautiful, smiling people holding out the waistbands of their old elasticated tracksuit bottoms, so you can see just how much more skinny they are now.

There is a slight rumble from behind the door. You ask what is behind it.

"But is it safe?" you ask.
"Oh yes, its perfectly safe" is the reply. "All you need to do is go through that door, and you will definitely lose all of that stubborn weight and absolutely nothing bad will happen to you whatsoever. Now if you'll just hand me your money there, that'll be great."

Sounds great, right? You excitedly take a step towards the door.

But before you step through the door, you take a moment to consider what might be behind it.  You don't know, and the person telling you to go through the door doesn't know what'a in there either.
No one has studied what's behind the door. There are no photos and  no videos of what's in there. All you have is this person's word that it is safe, and it will work.

Broadly speaking, there are three possibilities of what's behind the door:

1) Nothing. Its just a room. You go through the door, and nothing happens. You don't lose any weight, but you have lost your money.

2) It works. You step through the door and emerge as a smiling, happy, beautiful, skinnier you. You quickly run home to find some horrible grey tracksuit so you can smugly show everyone how marvellous you are now you're skinny.

3) Something harmful is in there. Maybe there is a big pile of dog poo right behind the door, and you are destined to step in it, which will be mildly unpleasant for you. Or the door could be perched on top of a cliff, below which is a mesh of razor blades that will cut you into little pieces. Worse than that, perhaps Piers Morgan is through there.

Do you step through the door?

All of which brings me nicely on to this season's most fashionable weight- loss aid, Raspberry ketone. Its the chemical contained in raspberries that makes them smell nice. Its widely used as a flavouring and fragrance agent in foods, which begs the question: if its so effective, why don't we already lose weight when we eat food that it is in?

You've probably heard about it already. By which I mean that you've probably seen someone on Twitter tweeting about how they lost 3000 kg using raspberry ketone, along with a handy link to a website where you can buy it. You've also then probably seen the follow up tweets, that go something along the lines of "Urgh, my account has been hacked. I've changed my password now, sorry."

And there's the first warning sign. People who make real medicines which work don't tend to need to resort to hacking people's social media accounts in a desperate bid to get people to buy their wares. You don't see Pfizer or Glaxo, for all their faults, hacking into random peoples' accounts and mass tweeting "My cancer is in remission thanks to Drug X. Buy it here!!!!".

Its not a particularly ethical way to sell healthcare products.

Putting all of that aside, is there any evidence that raspberry ketones work as a weight loss aid?

In short: no, except for 18 mice and a difference of about 5 grams at most. Which also means there is no evidence that it is safe. There are no human studies out there at all. All of this hype about it is based on the fact that its chemical structure looks a bit like two other chemicals (capsaicin and synephrine) which might have some effects on weight loss.

That's a bit of a stretch. Human bodies are complicated things, and we can't always predict how they will react to medicines. Even when we theoretically think that something might work for good, plausible reasons, there's no guarantee that it will (COX-2 inhibitors come to mind as an example). Marketing raspberry ketone as a foolproof weight loss aid just because it looks a bit like some other chemicals is like finding a random key on a street and expecting it to work without fail on your front door, just because it looks a bit similar to your front door key.