Customer walks into a pharmacy...

...and chooses what medicine they want to buy, before taking it to the pharmacy counter. Yes, that's right folks, instead of telling a daft joke, I'm going to witter on yet again about the self-selection of P-meds. This time I want to think about it from a patient's perspective. Some of these considerations may seem small and petty, but i just want to put my thoughts down on virtual paper and you can see what you think.

When I walk into a shop, I can be pretty easily intimidated. I'm shy, and I don't like to bother people. I also hate that uncomfortable feeling when you walk into a shop and you feel like you're being watched by someone and then you feel terrible about not buying something. I can get anxious about the smallest of things, in particular not quite knowing what you're supposed to do in a shop- if I can't find the til, or there's an empty box and i don't know who to ask, or if I can't find something, for example.Of course this is worse when I am feeling a bit poorly and I can be particularly skittish- im likely to go home without buying anything, even if i need it, because i can't be bothered to have to work out what I'm supposed to do. This brings me onto my first point about self selection

1. It could be different everywhere. Not all pharmacies will take up the self-selection option, so I'll need to ask at the counter as i am used to. But in some pharmacies, the packs may be out on the shelves, whilst in others, they might be in security packs or might be empty packs that I need to take to the counter, like an early nineties video rental shop. It sounds daft, but this sort of thing could be quite off-putting.

2. How the hell am I supposed to know what to buy? I tend to acknowledge people who know more than I do about a subject and listen to their opinion. If I go to the hairdressers, for example I tend to ask them what style they think would best suit my hair type and face. After all, they've done some training in cutting hair whilst I am utterly clueless about it. If I walk into a pharmacy, therefore I don't expect to have to do all the hard work of product selection myself. My product selection process for most things usually goes like this: 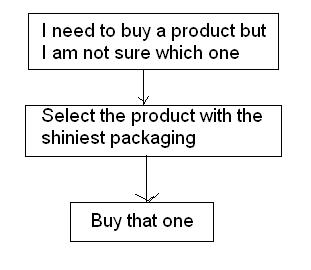 Its either that, or I stand around reading every single box of every single product. This would take me bloody ages, and would be pretty inconvenient.

3. What If Its The Wrong Thing? After I have found the shiniest product, I take it to the counter, where I am then told that I've picked up the wrong thing and I'm not allowed to buy it. This, frankly, pisses me off and adds even more inconvenience o the whole affair. I've chosen the product, and now some jobsworth glorified shop assistant is saying that I've chosen the wrong thing? how dare they! (I've lost count of the number of times I've been called a glorified shop assistant by patients-and on occasion non-pharmacist managers over the years, by the way). You know like when you're in a hurry, and you've picked something up in a shop and you take it to the counter, and they tell you that its on buy one get one free, but there is a huge queue behind and you're going to be late for your train so you just say "oh its fine, I'll just take that one". I suspect that would end up happening quite a bit as well.

4. Advice Isn't Quite So Forthcoming. When I ask for a specific product in a pharmacy, the counselling and advice I am given tends to be minimal (if at all), whereas if I ask what they would recommend for a particualr symptom (not that I usually have to bother doing that myself, but you know), I tend to be given fuller, more rounded advice as part of the product selection process- I've written about this before. If I want to know something about a product, I have to ask about it, and I might feel a bit stupid doing that when I'm supposed to have picked the product myself. In addition, I might not actually know that I need to ask for advice unless it is offered. With self-selection, I fear that offering routine advice would become the exception rather than the norm, and instead of being proactive in giving advice, we would instead get into a pattern of waiting to be asked.

5. Medicines Are Commodities And Its My Right To Buy Them. I've written before about the paracetamol problem- its so widely available that people think its safe and innocuous, and they can take extra or dismiss it because they've sort of forgotten that its a medicine. I think this may become a wider problem. If medicines are available on the shop floor for me to handle and choose myself, I assume that they're either not very good medicines, or they are so safe that I can use them how *I* like. If I want to take three times the amount of antihistamines that it says on the pack, then I can do, just like how if I want to eat peanut butter out of  a jar with a tablespoon then I should be allowed to, because its my choice to buy it and who is anyone else to judge me and tell me otherwise? this is going to be particularly problematic with codeine-containing medicines and similar.

Anyway, those are a few thoughts for now. I may add to them as time goes on. What do you think?