Is XLS-Medical Fat Binder worth its weight?

Oh Omega Pharma. Once again you provide me with some juicy blog fodder.

XLS-Medical Fat Binder has been on my radar for some time, but I haven't really gotten round to writing a blog post on it or taking a proper look at the evidence. However, prompted by a bit of real-life work I've just been doing, I've been doing some digging.

So what is it? Well, it contains something called litramine, which appears to be a cactus extract. It supposedly binds onto dietary fat and stops it being absorbed. Sounds suspiciously similar in action to orlistat, a licensed medicine. However, XLS- Medical Fat Binder is instead marketed as a medical device.

Here's what the company have to say on the matter:

"What is a medical device and how does it differ from traditional medicine?
I think what they've missed out here is this: "If we sell this product as a medical device we just need to fill in a form and send it to the MHRA rather than actually having to bother proving that it works so YAY LETS JUST DO THAT!!." It would seem pretty bizarre that orlistat, which is also not absorbed from the GI tract and which also prevents absorption of fat from the diet is regulated as a medicine whereas this product isn't.

What of the evidence? Well, Omega Pharma once again provide us with a list of the most vague references ever seen, making it virtually impossible to find anything to back up the results they are shouting about. As references go, just writing: "In vivo, 2-armed, randomised, placebo-controlled, double-blind study, conducted in Germany, 2009" is, as someone so succinctly put it on Twitter, the equivalent of saying "This one time, at Band Camp...". These studies don't appear to be published in any peer-reviewed medical journals, so there is no way to verify the results from them. Oh dear.

Well, two can play that game. 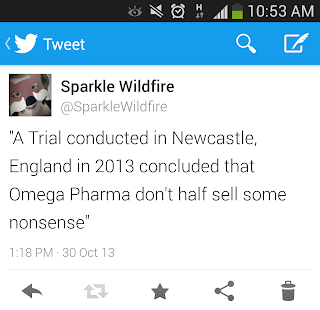 Of course, not one to rely on the manufacturers alone, I performed a literature review to see if there was anything else out there. And there is: all of one study. And to be honest, the results are promising. Whilst there is a link to this bit of evidence on the XLS Medical website, its hidden away in the tiniest of tiny footnotes, which seems a bit odd really, given it seems to show that Litramine actually works. The trial appears well desgined (double-blind, randomized, placebo-controlled), and whilst not massive (n=123), it isn't as tiny as the usual sort of guff that can be purported as evidence. Patients who used Litramine lost an average of 3.8kg (+/- 1.8) compared to 1.4kg (+/- 2.6) in the placebo group (p<0.001), which actually seems rather encouraging.

Hang on though, let's not all jump for joy and throw away the salad leaves just yet. Patients in the trial had a hypocaloric diet plan and exercise regimes. The trial only lasted for 12 weeks, so is pretty short- term. and of course its still quite small, and the results would need to be replicated in further, larger, well-designed trials before we could know for sure.

And here's the big problem with it. the study medication is described as:


"Litramine IQP G-002AS is a natural fiber complex derived from Opuntia ficus-indica, enriched with additional soluble fiber from Acacia spp.IQPG-002AS is standardized for its lipophilic activity and has been shown to reduce the dietary fat absorption through GI fat binding."
- Grube B, Chong P, Lau K, and Orzechoski H. A Natural fiber complex reduces body weight in the overwieght and obese: A double blind, randomised placebo controlled study. Obesity 2013. 21: 58-64
The study participants were given 500mg tablets three times a day. However I can't see anywhere on the XLS-Medical website that actually tells me how much litramine is in the tablets- it could be 5mg or 500mg. . So whether or not we can apply these promising results to XLS-Medical, we simply can't say.
And wahoosa are these things are expensive. £39.99 for a months supply? That's six and a half hour's work at minimum wage.