The Magazine Of Doom

Today, I and several others have sent strongly worded emails to W.H. Smith's.

The reason? A magazine they are stocking which is frankly disgraceful. Encased in a glossy, brightly coloured cover, this is clearly such a blood-pressure-raising piece of crap it's ridiculous. 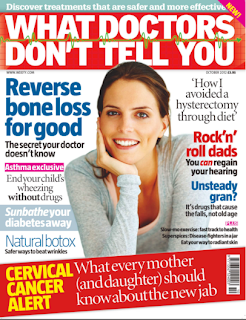 However, to the untrained eye, it's another helpful glossy magazine, packed with useful hints and tips for how to stay healthy. Look at that nice, smiling, benign healthy looking lady. And it is a sad fact of life that patients and the public really do respond to these sorts of publications more than they do to advice from their healthcare practitioners. I can't tell you how many patients have stormed into my pharmacy with a piece of paper cut from a newspaper, demanding to know why they have been given this horrifically dangerous drug. Goodness only knows how many would turn up at their doctors. I would often spend a lot of time with these patients and explain to them what i could about the limitations of these sources, but to be honest I often felt that i had neither the resources or time to be able to do so properly. Some would change their mind, some would be marching off to their GP, usually demanding  more expensive newer drugs whose safety record we know even less about.

To be honest, even the title of this publication upsets me: What Doctors Don't Tell You. As if they are willingly sat in their surgeries or their hospital wards, giggling evilly about all of the suckers that they are going to see who are in pain, or depressed, or generally feel sick and vulnerable, rubbing their hands together, and all the while they are thinking "I could CURE you within a second, but I'm not going to, I'm going to sit here and watch you SUFFER! MWAHAHAHAHAAAA!". Actually, doctors (and any other healthcare professional) are usually people whose primary aim is to help people. They're usually overworked and under-resourced, and I suspect that many (like me, when I worked in community pharmacy) constantly feel guilty that they aren't able to help as much as they would like, because of their lack of time and resources. Yes, there is the odd Shipman character here and there, but I suspect very few people actually go into front line health care purely for money, or for the kicks of withholding various cures and treatments from their patients. Doctors, pharmacists, nurses, and other healthcare professionals may not get everything right every time, they may not be as up to date with evidence as they would like, and they may not make exactly the right decision for every single patient. But my word, I bet they really, really would like to.

The fact of the matter is: What The Doctors Don't Tell You about are usually overly hopeful health claims based on little evidence, and peddled by people who DO have the intention to make money. What they don't usually tell you about is unicorn tears and magic water and rooms made of salt and badges with unicorns drawn on (listen to Skeptics with a K podcast episode 45) because they very probably DON'T WORK, and your doctor wants more than anything to make you better. No doctor is going to advise that you try to avoid a hysterectomy with diet (Front Page of What The Doctors Don't Tell You)  if you are in a lot of pain now and a hysterectomy would improve your quality of life for you quickly, as an example. A nutritional therapist, though, as an example, may advise you to delay surgery and try diet instead, causing you to suffer for longer than is necessary.

I know this has turned into a bit of a rant. It's hardly evidence based, but it is based on genuine emotion from someone who, despite all my cynicism and negativity, just wants to do whats best for patients. I know that most of my health care professional colleagues feel the same, and this sort of sugar coated nonsense is actually rather offensive. I used to lie awake at night worrying about the patients i had seen through the day. I had many episodes of private tears for the ones that i couldn't help, and my whole week would be lifted when I had made someone's life a little bit easier. I wonder how many purveyors of woo could say the same.

Anyway, the general gist of this post is: email W.H. Smith and tell them to get this nonsense off their shelves,
Posted by SparkleWildfire