In February 2013, my friend Nancy and I delivered a Newcastle Skeptics in the Pub talk entitled Homeopathy: Where's The Harm? As a follow up to this, we've decided to write a series of blog posts about a number of points we covered in the talk:

In the next installment of our series on the harms of homeopathy, I want to talk about interactions. I've covered this a bit in the past, but let's have a look at this area in a bit more detail.

We all hopefully know by now that homeopathic medicines pretty much have no trace of active ingredient in them by now. Do we need to worry about drug interactions with homeopathic remedies?

Can homeopathic medicines interact with conventional medicines?
The obvious answer is no. Magic Sugar Water Pills are highly unlikely to affect any conventional medicines. There's a lack of actual evidence to prove this, but I think it's pretty safe to rely on a theoretical basis here. So that's great, right, blog post over and see you later. If only it were that simple. 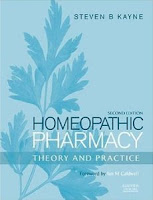 I have in front of me a book called "Homeopathic Pharmacy", by Stephen Kayne. This is a book aimed at healthcare professionals, and indeed is a  recommended resource for medicines information pharmacists in the UK. And yet, even this source, which we could consider to be one of the more balanced tomes (despite the ominous mention of Dana Ullman in the acknowledgments), contains a wealth of dangerous nonsense. This book tells me that, for example, "potent topical steroids are thought to negate the use of  homeopathy in the treatment of eczema and psoriasis" Now I know more than some that skin conditions such as this can be horrifically uncomfortable, not to mention their effects on your self-esteem. Stopping treatment that works in favour of a placebo is not, in my opinion, acceptable in any shape or form, especially given how vulnerable and desperate people can be because of skin conditions- don't forget that in some cases, dermatological conditions are terminal, as they can drive sufferers to suicide.

There can, apparently, be interactions between oral steroids and homeopathy too. "the patient's symptoms tend to be masked, however, making an accurate choice of remedy much more difficult", we are told on page 205 of Homeopathic Pharmacy. Well, you could call it a masking of symptoms, or you could- as I prefer, refer to it as "working". So what is the average homeopath to do then, when presented with a patient who is taking steroids but seeking their help? It would seem that the obvious (but sadly not the ethical) solution would be to ask them to discontinue their steroids so that that the symptoms are "unmasked". This will obviously lead to an increase in symptoms for the patient, and lead to unnecessary suffering, but it can also precipitate acute adrenocortical insufficiency, which can in the worst case scenario be fatal. Patients should "ideally" discontinue their steroids for 6 weeks prior to initiating a homeopathic remedy- this is more than enough time to result in loss of control in their condition.

It's not just drugs themselves that can be a problem, but the excipients (inactive ingredients used in the formulation of a medicine) too. Strong flavours used in syrups, for example. This could potentially discourage patients to take- or to give their child- antibiotic syrups, with the potential to worsen or prolong a patient's condition.


Can foodstuffs interact with homeopathic medicines?
Yes, apparently so, though again there is no hard study evidence for this- why would there be, when there's no good hard study evidence that homeopathy works in the first place? Coffee, tea, cocoa, chocolate, and spicy foods are all to be avoided. Aside from being unnecessarily restrictive, and potentially causing a patient anxiety, this idea fills me with horror. Imagine a life without tea, chocolate, or spicy foods. I rely on all of these three things to get me through my daily life, and would inevitably become depressed if I had to avoid any of them.

It would seem that homeopaths utilize certain foods or remedies as "antidotes". Apparently, if a remedy isn't working, and they want to try something else, they might ask a patient to drink a cup of coffee, or take a remedy like camphor to "wash out" the previous remedy so that they can start again. I'll refer you again to "Homopathic Pharmacy"- with a reminder that this is one of the more reasonable texts:

"It is certainly not dangerous in life-threatening terms, but used injudiciously will interfere with the vibrational pattern of the vital force.

Vital force, vibrational energy, sugar as an antidote to sugar, and none of it- not a scrap- based on science, evidence, or even basic logic.

See you again soon for the next episode :)