Book Review- Which Way To The Nearest Wilderness?


“I left the woods for as good a reason as I went there. Perhaps it seemed to me that I had several more lives to live, and could not spare any more time for that one. It is remarkable how easily and insensibly we fall into a particular route, and make a beaten track for ourselves.” -Henry David Thoreau

I was a pretty proficient reader as a child, and I have a vague memory of winning this book for some reason or another from school. I had completely forgotten about it, then for some reason, the title just popped uninvited into my head the other night, and I knew I had to read it again. I managed to find a secondhand copy, which, when delivered, turns out to be an ex-school library copy, still nestled in its plastic cover, and with a label stuck neatly into the front declaring it a gift to the school from the P.T.A. It has that beautiful, musty smell of old books and appears to have been last taken out of the library in 1991. I can't help but wonder by who, and what they thought of it. 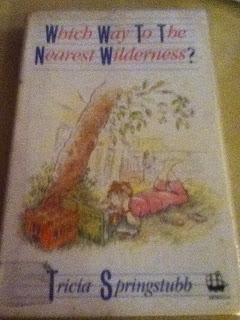 I remember reading this book over and over as a child. I really loved it, although I do remember not quite relating to the situations the main character, Eunice, finds herself in. She has a brother and a sister, and parents who are teetering on the brink of divorce, with a stormy home life characterized by constant arguing. I remember struggling with some of the words, but caring enough about the story to get out a dictionary and find out what they meant.

On reading it now, as an adult, I’m amazed by it. It’s a wonderful, forgotten book, and one of the best portrayals of girls and friendships as I’ve ever seen in either a children’s book, or even adult literature (although I will make an exception for Margaret Atwood’s Cat’s Eye, which I’m also reading again at the moment and which is like the perfect counterpoint to this book.) I wouldn’t say its feminist as such, but it is about girls who are not defined by their looks or even their talents, but by their friendships, personalities, morals, and philosophies.

It doesn’t, like most children’s literature, shy away from difficult topics like divorce, bitterness, or mental health issues. It’s ostensibly aimed at girls, but isn’t shrouded in pink or ponies or candy-floss. Nor is it  faux-darkly serious- There isn’t a vampire in sight. It’s a Ken Loach-esque naturalistic, social realist sort of YA, I suppose. The language is actually quite challenging: on the first page, words like philosophy, hobgoblin, façade abound.

It centres around Eunice’s decision to go into the wilderness, build herself a cabin, and live as a hermit, prompted by reading Walden. In the meantime, her sister suffers-and survives- heartbreak, her parents separate and precariously reunite, her quiet, sensitive brother requires- and survives- counselling, Eunice and her best friend set up a business, fall out, and make up again. Where a lot of YA for girls is all about boys, reinforcing the belief that a girl can’t be fully whole without a relationship, this book shows Millie stepping away her boyfriend when he declares he loves her, and eventually embracing her independence, even within the context of a relationship.

Reading this now, as an adult, I’m amazed by how many important life lessons are in there. I suspect they may have seeped into me without my knowledge as a read and re-read it as a child. Is this where my love of peanut butter sandwiches comes from? My ability to deploy sarcasm liberally? My-previously unsuspected, and completely surprising to myself- ability to bounce back from my own divorce? My love of my own company and need to retreat, coupled with an overwhelming love for my friends? Although I must admit, the idea of living in the countryside on my own fills me with absolute dread.

I finished reading it in three days, and I’m slightly stunned that one hardly-known little book could have that much packed inside it. I suspect they don’t make children’s books like that anymore.