Am I the World's Worst Skeptical Pharmacist?

Yesterday, I had a cold.

We all joke about Man-Flu, and how rubbish men can be when they have a cold. But even the worst of Man-Flu sufferers is nothing compared to me. I am the Queen of Minor Illness related whinging.Instead of merely having a simple cold that makes me feel slightly rubbish, I have some sort of TB-Ebola crossover which makes me the illest person alive at that particular time.

I'm feeling a bit better today, but I'm left with a cough. Not a particularly bad cough, but a cough nonetheless. So this morning, I found myself buying Buttercup syrup. 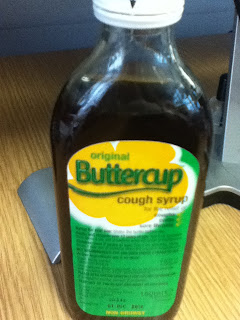 Now, I know fine well that there is no good evidence for any cough preparations. I know that squill, the main active ingredient, has insufficient evidence to rate its efficacy. I know that capsicum is just going to give me a little bit of a warming sensation and that's it. I know that, for a couple of seconds after a swig, my throat may be thinly coated with a viscous substance which will feel nice, but will soon be washed away by all the other goo encased in my body. And yet, I still spent some of my hard earned money on it.

So, I suppose the question is: why? Surely, with knowledge that there is no evidence, and all of my new found skepticism, I should be steering away from products that I know won't work? Am I really just a poor excuse for a skeptic, and a poor excuse for a pharmacist? After I'd finished hanging my head in shame, I thought about this a bit.

And my primary answer is probably: Hope. I know it wont work, but I hope that it will because I may have a date-type thing on Saturday and I don't particularly think hacking up a lung is a great way of selling myself (and no, I probably can't fall back on my charming personality as I doubt that is much better than lung-hancking). The secondary answer would be that it tastes nice, and it has teensy tiny amount of alcohol in which makes me feel slightly smug about alcohol intake at work.

I find myself wondering (ugh, this sounds like a SATC storyline now) how many people who turn to woo and quackery as a treatment option think similarly. I wonder how many blindly accept that, say, homeopathy is going to work for them, and how many go along with it in the vain hope that something good may happen. I also wonder how many peddlars of woo think like this themselves, and how many think "haha, suckers!" when practising fake magic on people.

Anyway, back to whinging profusely and coughing up parts of various organs.